Porsche is forging ahead with series production of an all-electric sports car. The “Mission E” concept study shows that a Porsche still has all the characteristics customers expect of the brand in the era of electro-mobility, especially intelligent performance coupled with the everyday practicality of a sports sedan. 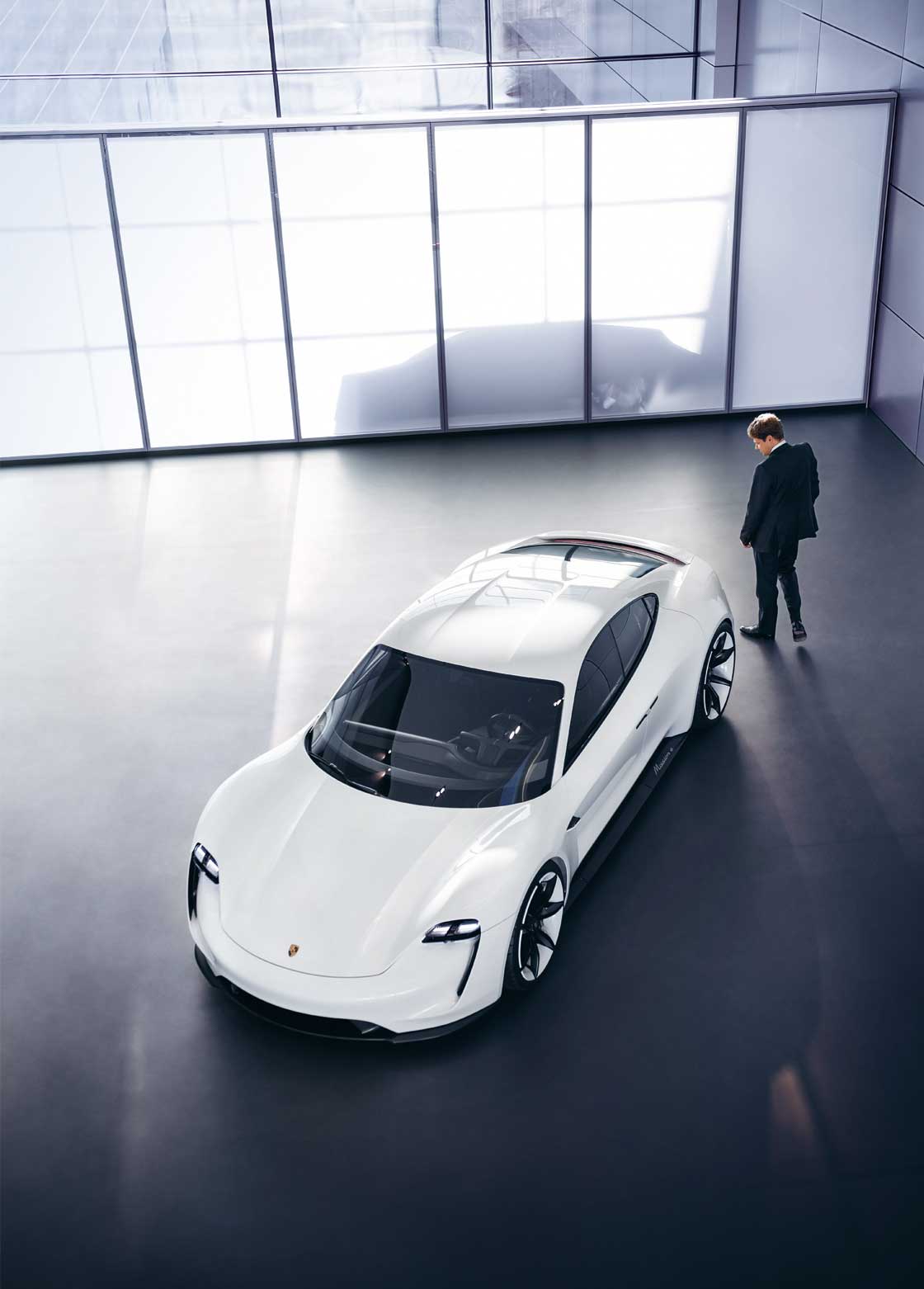 This car has a mission. In the words of the man who is responsible for its success: “Porsche is developing the sports car of the future.” Stefan Weckbach (39) has been preparing for this mission since the end of 2014. The debut of the “Mission E” concept car at the Frankfurt International Motor Show (IAA) in 2015 was only the first stage of a long journey. Series production of Porsche’s first all-electric model is to start at the end of this decade.

Many details still need to be addressed before the concept car becomes a production model. Nevertheless, the “Mission E” embodies a promise: even in the era of electro-mobility, a Porsche still remains a real Porsche. It looks like a Porsche and drives like a Porsche. “We are not making any compromises”, says Weckbach. 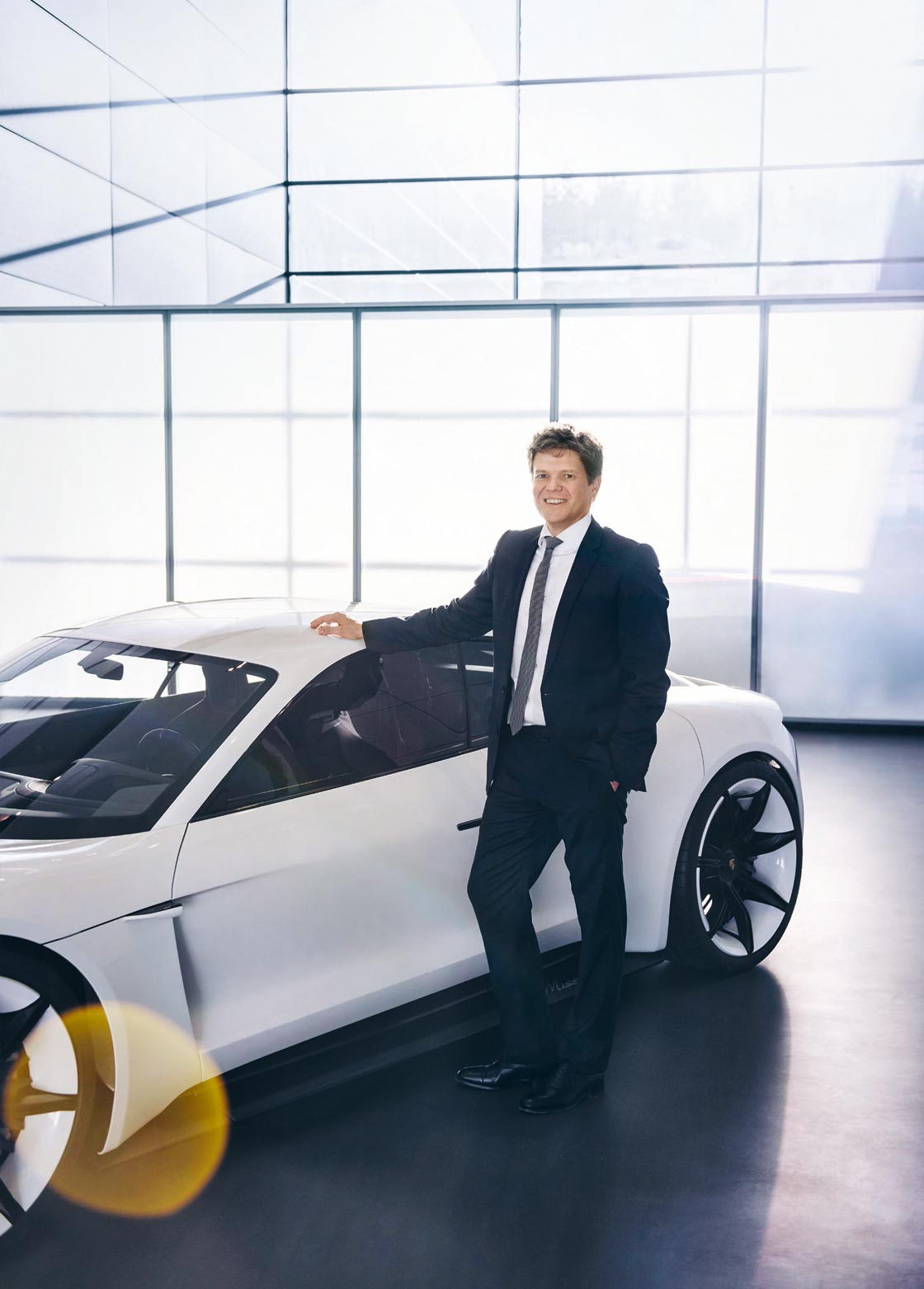 “With many of today’s electric vehicles, performance deteriorates very rapidly following brisk acceleration – that is unacceptable for Porsche.” 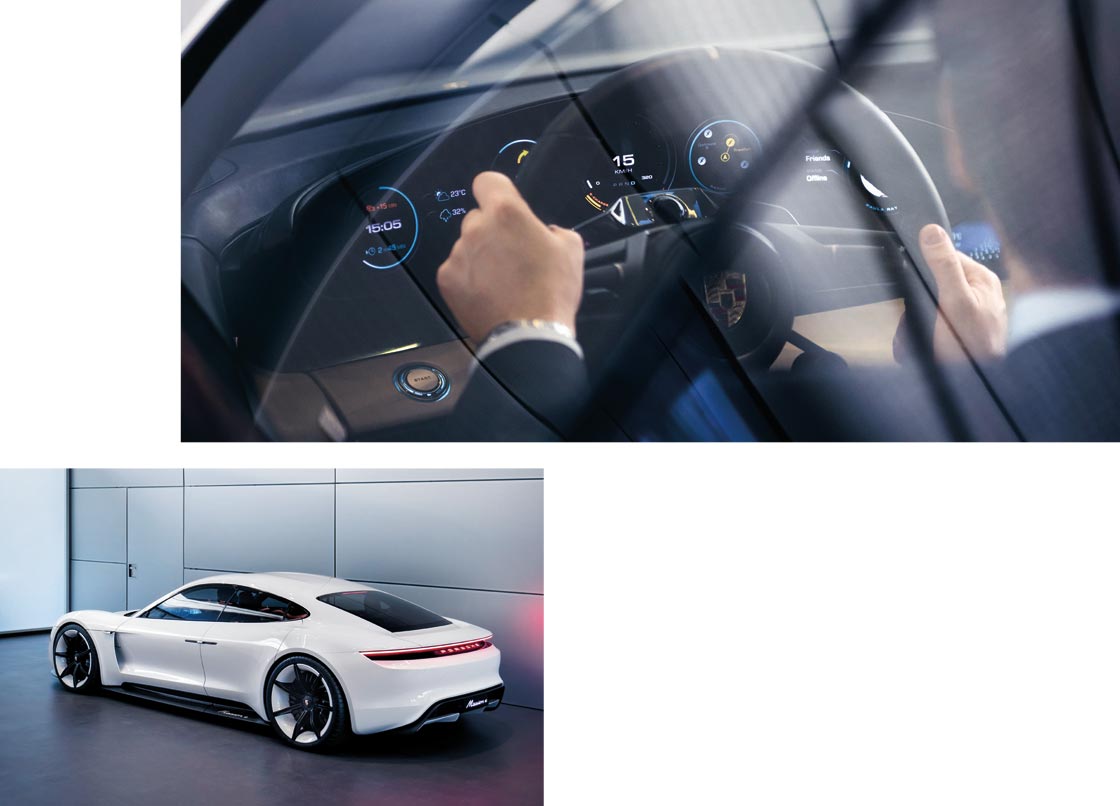 This is why one of the top priorities in the design brief is that the “Mission E” must perform like a typical Porsche: it must be able to lap the Nürburgring in less than eight minutes. The full-feature four-seat sports car offers a highly practical battery range of at least 500 kilometers without any restrictions. This is not only new territory for Porsche but also for electric vehicles in general. And yet that is only part of the whole story: “We have been working on the electrification of our vehicles since 2009”, Weckbach reports. “Porsche launched the Panamera S E-Hybrid1, its first production plug-in hybrid, in 2013. Since then, we have accumulated considerable experience which is now proving very useful.”

However, the decision to do without an internal combustion engine means approaching many things in an entirely different way and breaking new ground. The battery, for example, is considerably larger and heavier to ensure a long range. It is distributed over the entire underbody between the front and rear axles to prevent problems with fast cornering. This means that the centre of gravity is very near to the road surface, a typical feature of sports cars. Above all, the battery operates with 800 volts, more than twice the figure of present-day electric vehicles. Higher voltage means that more energy flows through the wiring of the vehicle at the same current. This is especially important for charging. In only 15 minutes, the “Mission E” can charge enough energy for a further 400 kilometers. In the owner’s garage, charging convenience is more important than charging speed, which is why the batteries of the “Mission E” can also be replenished by induction. A magnetic coil installed under the vehicle provides the power required, which means that the driver no longer needs to deal with a cumbersome charging cable. 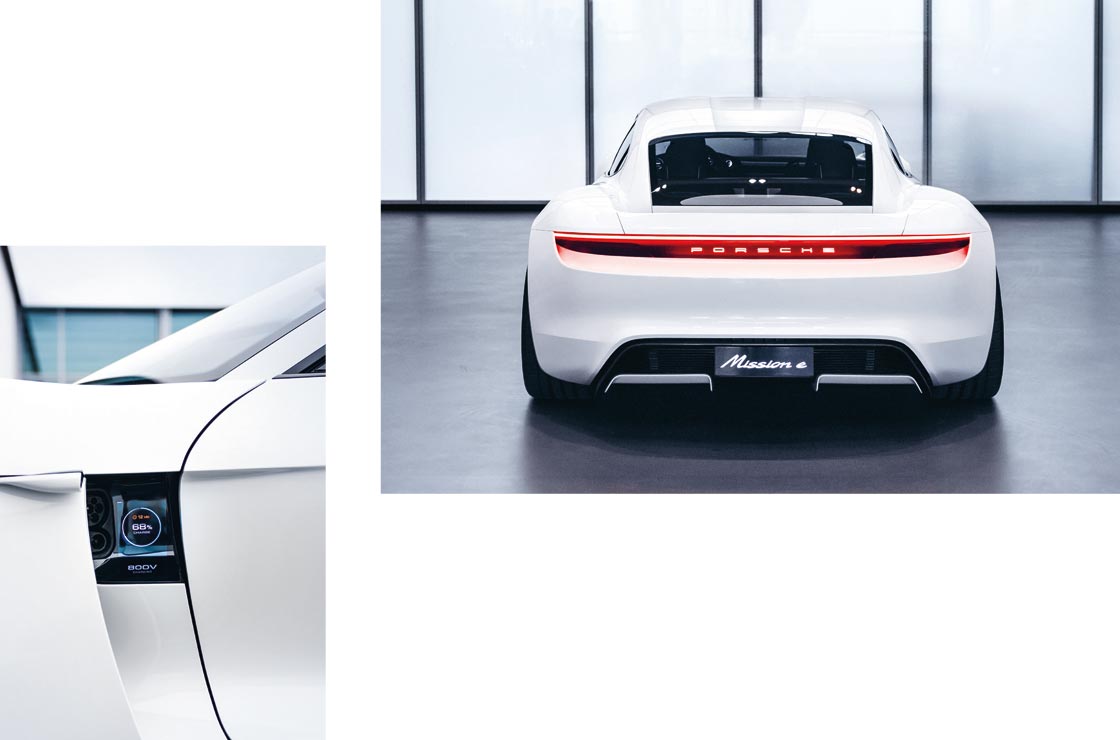 Even for an all-electric vehicle, the engine is decisive for the car’s performance. Porsche has opted for permanently excited synchronous motors based on the technology of the 918 Spyder2 and the 919 Hybrid and featuring an especially high power density. Above all, though, the engines have been designed to allow high-speed travel over long distances. “With many of today’s electric vehicles, performance deteriorates very rapidly following brisk acceleration”, Weckbach explains. “That is unacceptable for Porsche.” Power losses are counteracted by a number of features including a sophisticated motor and battery cooling system.

Initially, a driver at the steering wheel of the “Mission E” does not notice the ingenious technology. The cockpit is strictly designed for driving, with no frills or distractions. The driver’s eyes focus on five round digital instruments in a free-standing cluster that use organic light emitting diodes to generate a 3-D effect. Another groundbreaking innovation is the “eye tracker”. A camera in the vehicle interior continuously monitors the driver’s line of sight. By looking at a certain instrument and pressing a button on the steering wheel, the driver activates the appropriate menu, which can then be operated using the steering wheel. This is a car designed for a distraction-free driving experience.

Stefan Weckbach and his colleagues are making good progress with their mission. The first trial electric drive systems and high-voltage batteries – known as the subframe – will soon be tested on prototypes. The production version is due to roll off the assembly line before the end of this decade – not just anywhere but at Porsche’s main plant in Zuffenhausen. By then, at the latest, the heart of the brand will be electrified. 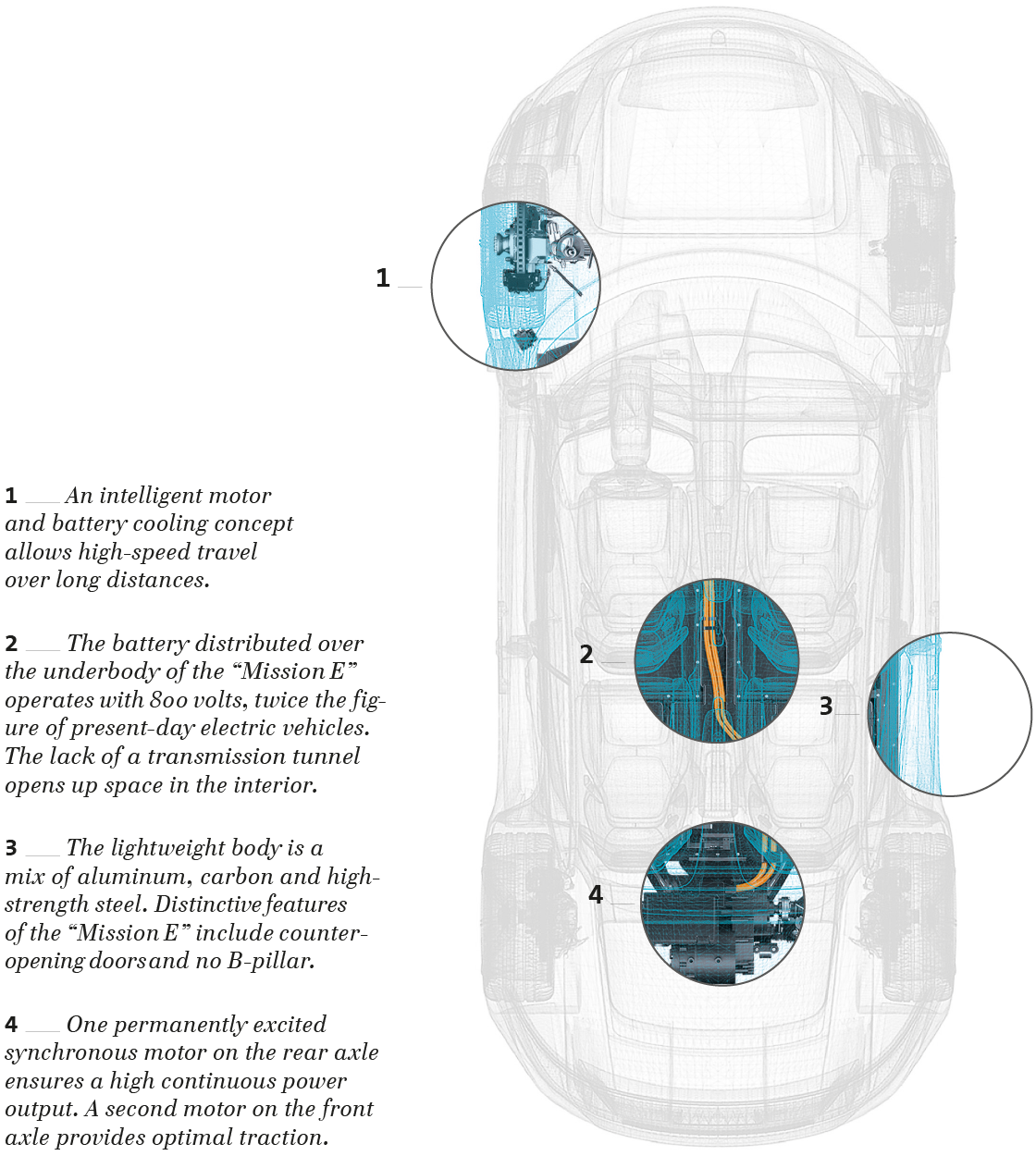