The Volkswagen Group employs over 48,000 people in research and development. It is their ideas that spur technological progress. But how does Volkswagen make sure innovations and customers’ wishes are a good match? A glimpse behind the scenes.

The ultimate driving machine? The comfortable space cruiser, roomy enough for the whole family? Or perhaps even a car-sharing model that offers the best of both worlds? People’s demands on individual mobility are as varied as the lifestyles in post-modern society.

Hordes of market researchers collect data on customers’ wishes, broken down into age groups, regions and social status. But these are always just snapshots. For a car manufacturer like Volkswagen that is active all over the world, it is important to know the potential wishes of tomorrow’s customers today – and to align research and development activities so that these wishes can be fulfilled.

Berlin. Wolfgang Müller-Pietralla (54) casts an eye over the immaculately turned-out vehicles on display in “DRIVE.”, the new Volkswagen Group Forum which opened in May 2015 to present ideas on future mobility as well as showcasing the latest models. A Ducati catches his attention. Müller-Pietralla smiles and moves over to the bike. “Many things change, but some always stay the same”, says the Volkswagen Group’s Head of Future Research. “There is and always will be an intrinsic link between mobility and emotion.”

At the same time, Müller-Pietrella is convinced that digitalization is rapidly changing our demands on life and mobility: “People are getting used to accessing the entire world via their smartphones – and they expect to be able to do that in their car just like everywhere else.” So automakers must deliver on seamless networked mobility in an ever more complex world. In a few years, for example, the driving experience will only very occasionally involve searching for a parking space. Instead, the car will drive itself to a free space and wait for the “come to me” call to the desired location.

Müller-Pietralla’s team is multi-disciplinary – from IT specialists and bionics experts to philosophers – and employs scientific methods to track the future. Together with the brands and specialist departments, the team sketches future scenarios and innovations based on an analysis of future-oriented trends. This approach has proved its worth: “Ten years ago we recognized that light would move up people’s list of priorities with the advent of new technologies”, Müller-Pietralla recalls. Numerous such technologies emerged, right through to adaptive headlights based on laser technology, which not only illuminate the road better but also keep drivers more alert when traveling in the dark.

Not even a future researcher can predict the future. “But we can identify long-term developments and inspire engineers”, Müller-Pietralla says. “Human intuition is based on empirical knowledge and vision, and often leads to the best solution for the customer.”

Wolfsburg. “Denk:Raum” is what Jennifer Sarah Geffers (38) calls a conference room in an office building just outside the city center. The name is not the only difference between this particular room and many others used by the Group. There is plenty of space on the six-meter board that hangs on the front wall for several people to brainstorm simultaneously, sharing and discussing their thoughts. Colored pens jostle with Lego bricks on the shelf. Mere gimmicks? By no means. “This is about visualizing good ideas quickly”, explains Geffers; she is one half of a management pairing at Group IT and, together with a colleague, is responsible for the “Ideation:Hub”, a unit set up in October 2015. 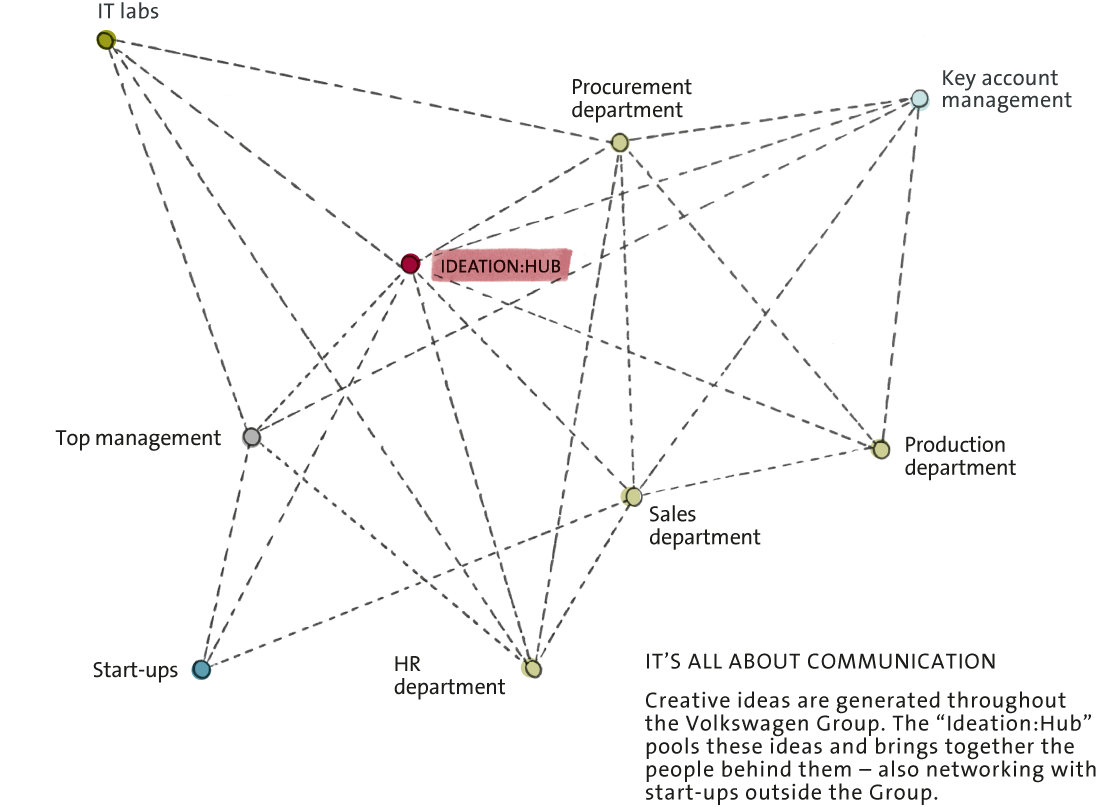 “We are surrounded by ideas”, Geffers says. Some of them come from the “Digital:Lab” in Berlin – also recently opened – or the “Data:Lab” in Munich, as well as from specialist departments or Group brands. “Another important resource is the dialog with start-ups outside the Group, because it provides impetus for the mobility of the future.” For sales management graduate Geffers, the most important task is linking people and ideas.

That is why Geffers created a unique event format called “Digital Future Days”. Experts from all over the Group meet up at these workshops to discuss one specific issue, such as how to introduce customer identification throughout the Group. At first glance, that might seem like a technical detail, but in the age of digitization it is in fact extremely important: “We need unambiguous customer identification – even if the customer purchased the vehicle from an independent dealer or bought it second hand – because that is the only way we can offer them digital services tailored to their requirements, such as apps or services specifically designed for their particular model”, Geffers explains.

This focused search for ideas is one aspect of the work performed by the “Ideation:Hub”. The second, equally important aspect is the meticulous evaluation of ideas. On behalf of Group IT, Geffers provides follow-up support for “hackathons”; these are events where young programmers come together to develop new digital solutions and apps. At one particular competition, the “Carvatar” app caught her eye: this game software encourages drivers to take care of their car, for instance by making sure they do not miss a service check. If, like this one, an idea seems innovative and practicable, Geffers networks the IT talent with specialists from the Group. In fact, Geffers’ mission could be described as making sure that no good idea is overlooked. She is absolutely convinced of one thing: “Ten years from now, the car will be a vehicle for digital services.”

Ingolstadt. An enormous poster welcomes visitors to Thomas Müller’s office. It is a photo of an Audi RS 7 Sportback1 on the Hockenheim circuit. The driverless car completed the lap in less than two minutes. The 39-year-old belongs to the small group of developers who set out in 2010 to make Audi a pioneer of highly automated driving; he himself became the project manager. What is his motivation? Is he trying to make the driver superfluous? Müller vehemently rejects that idea: “On the contrary, this is about self-determination! Piloted driving should give people greater freedom to organize their time.” The first piloted driving model, where the driver can activate a traffic jam pilot for stop-and-go traffic, is scheduled to go into production soon. On a highway, the pilot can not only accelerate and brake at speeds of up to 60 km/h, it can also take over the steering. 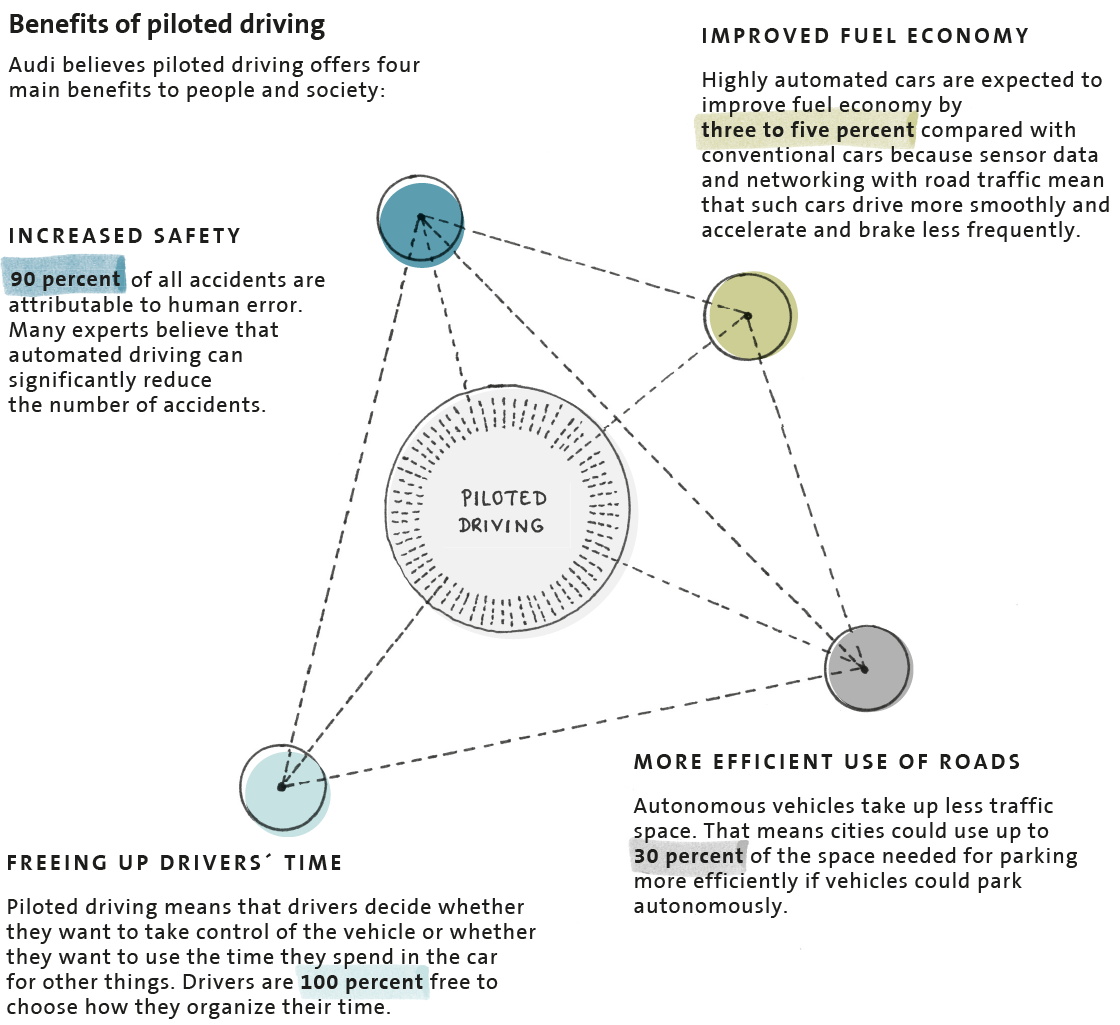 Great technological progress has been made in automated driving. The central controller, which took up the entire boot in the first test vehicles, is now no larger than a laptop. Nevertheless, Müller puts a damper on any expectations of highly automated driving in every situation – that is not just a question of the technology, the infrastructure and legal regulations, it is also because of people: “Drivers have to build faith in a self-driving car, so it is quite right to take things step by step.”

Müller tends to talk more about people than technology. The interface between the driver and the piloted car must become much more sophisticated than is the case in today’s vehicles. For example, drivers must always be given a clear signal whether the car is in automated mode or whether to intervene manually. They must be able to take back control of the vehicle within ten seconds, even if they have just been checking emails. And piloted driving should feel good as well. “This isn’t so much about getting to your destination quickly, but more about enjoying the time you spend traveling in comfortable and attractive surroundings”, Müller says. “People can decide for themselves whether they want to use their time to work or just sit back and enjoy – a bit like a business class flight with a good airline.” But with one crucial difference: you can decide at any stage during the journey to get back into the pilot’s seat.

Södertälje. Three big screens form a semi-circle in front of the cab set up in a darkened lab. Anna Selmarker (46) puts her foot on the gas pedal. “Now we’re driving in a virtual world”, says the software engineer who is responsible for HMI development at commercial vehicle manufacturer Scania. HMI stands for “Human Machine Interaction”, the interaction between human drivers and their workplace. The driving simulator is Selmarker’s most important tool. This is where new display and control concepts can be tested at a very early stage in the development process. These tests not only involve Scania’s engineers, but also truck drivers, who thus have the opportunity to test and shape their future workplace.

Digital networking between the truck and the freight company will change the driver’s job quite significantly. More and more data about the truck and its handling can be made available; for example, information on spontaneous changes in the route, which results in fewer empty runs and in turn reduces the environmental impact. In theory, the possibilities for presenting information to the driver are endless, particularly given the constant stream of new display technologies. The challenge therefore lies in designing a concept that fulfills one clear priority: “We want to find out how to design displays so that the driver’s attention is never taken off the road.”

Work on new HMI concepts is particularly relevant for automated truck driving. Scania is one of the participants in a project that is researching into “platooning”: this is a system whereby trucks drive themselves in tight formation on the highway, automatically following a lead truck. The smaller inter-vehicle distance reduces aerodynamic drag, similar to slipstreaming in cycle racing and therefore also cuts fuel consumption. Moreover, automated driving improves safety because the risk of a tail-end collision as a result of driver inattention is significantly reduced. “This kind of automated driving needs completely new information concepts”, Selmarker explains. For instance, the driver could be given sufficient warning that one of the trucks traveling in front is going to leave the convoy. The prototype of such a display has already been programmed. It even includes a chat function which truck drivers in the platoon can use, for example, to arrange to meet up for their break at the next rest area. “Such interactive elements are important for drivers”, Selmarker says. “We make sure they can be used safely.”

Four people, four professions, four different tasks in the Volkswagen Group. What these four have in common is their search for answers to the shape of future mobility. For all of them, their work centers on people – because a good idea can only be turned into something worthwhile when it enhances customers’ lives.